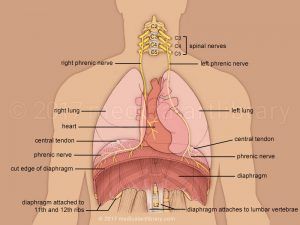 If we look first at the respiratory diaphragm, we know that it a large dome-shape muscle that sits underneath the intercostals (rib cage). It separates the chest cavity from the abdominal cavity and its primary function is to aid in respiratory function.

One interesting connection is between the respiratory diaphragm and the pelvic diaphragm, cue The Jellyfish®! These two diaphragms work closely with one another to maintain and respond to any change in intra-abdominal pressure. In short if the repository diaphragm lowers (inhale) the pelvic diaphragm will respond by lowering (lengthening). As well as responding to intra-abdominal pressure, the pelvic diaphragm also helps to maintain trunk stability and maintain urinary continence during breathing and coughing. There have also been studies to suggest that there is an electrical activity occurrence to the pelvic floor muscles before normal inhalation. This same electrical activity is also present for the transvers and internal obliques (deep and side abdominal muscles)

It is also thought that the vagus nerve (a large important nerve stemming from the skull that links the neck, heart, lungs and abdomen to the brain) also links the respiratory diaphragm and dysfunction can result to symptoms present in the region of the cervical, the floor of the mouth and dura as well as the eyes. There are several other nerves that connect via nerve fibres to the eyes, tongue and cervical base, these then link to the lumbar spinal cord (L4) and can, according to some explain the link between sight and posture.

Interestingly the suboccipital muscles that sit within the head can cause problems at the base if the neck and have proprioceptive properties that are greater than that of larger muscles such as glute max! These muscles also share a link to the trapezius muscles (large back muscle), part of the thoracolumbar fascia.

Going back to the floor of the mouth, the connection to the diaphragm can be seen when looking at poor swallowing or sleep apnea or in diaphragmatic dysfunction. This can again be explained by studies showing the electrical activity involved in the two diaphragms.

The Diaphragm and lymphatic connection

Through respiration and contraction of the muscles of the limbs, the venous drainage is enhanced. During deep and slow respiration, the diameter of the vena cava is decreased, and its efficiency reaches its peak. Research suggests that during optimal diaphragmatic activity, venous drainage problems can be prevented. This is due to the diaphragm helping with increasing blood flow. Correct breath is also suggested to enhance lymphatic flow.

The connection of fascia

Now the important bit! We know that the abdominal muscles are related to the costal, lumbar and pubic areas of the body. This includes the muscles; rectus abdominals, internal and external obliques, transversus abdominis, psoas, quadratus lumborum and multifidus.  The fascia has tissues that have fibres capable of contracting which may cause spasms, leading to dysfunction and even pain. We can therefore assume that a dysfunction in any part of the body covered by this fascia will show as a symptom in the area or near.

The fascia of the diaphragm posteriorly can be separated into four parts. These parts join the aortic system, inferior vena cava, liver, psoas, QL, cardiac area, phrenic-oesophageal ligaments and the kidneys. 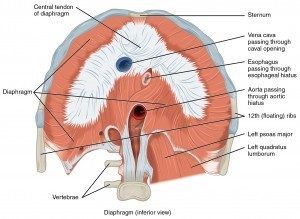 One of the fascial systems is that of the fascia transversalis, which has a strong connection to the transversus abdominis (TA), this is related to the pleura, pericardium and the diaphragm from a continuation of another fascial system. It starts in the neck (which include the scalenes), this links it to the pubis via the fascia system. It covers the epimysium of the TA and continues onto the white line of the rectus (six pack) and finally the pubic region. It also passes the external obliques. Research again suggests that if there is a dysfunction within this fascia then the stability of the sacroiliac joints (SIJ) may be affected due to the connection of the diaphragm, TA and pelvic floors.

The thoracolumbar fascia, starts in the sacral (bottom of the spine) area through to the thoracic area and finally to the cervical region. This fascia connects the muscles of the latissimus dorsi, trapezius, glute max, external obliques and the ligament that link the ilium to the sacrum (belonging to the pelvic floor system). This may also help to explain the link between SIJ pain and dysfunction of the diaphragm and pelvic floor.

The final part if the diaphragm fascial system starts on the 12th rib and finishes on the iliac crest (pelvis). This fascia can be seen to associate the QL with the diaphragm connected to L2, which aims to stabilise the lumbar vertebrae and assists in force control.

But wait there is more- According to the Dallas Osteopathic Study Group (starting almost 30 years ago!) suggested that there are in fact eight diaphragms within the human body. Their main job to allow optimal flow of interstitial fluid through the body, leading to optimal health. These 8 consist of:

The group suggest that a restriction of dysfunction in one of these can lead to dysfunction of the tissues and/or the joints in that area.

*Dura mater is the outermost layer of three membranes that surround the brain and spinal cord. 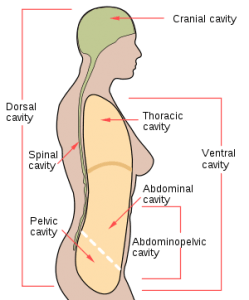 We can now look closely at the four main diaphragms known as the transverse diaphragms. These occur at junctions in the body where there are changes to the function of the spinal column. It also acts as a flexible layer, separating each space of the four cavities within the body: the cranial base, thoracic inlet, respiratory diaphragm and the pelvic floor. Each one of the diaphragms stretches from the front to the back of the body.

As we can see there is a lot going on! Not only is our breath important for the obvious but it also plays a vital role in the function of the body itself. It plays an important role in posture, organ function and links to both the pelvis and the floor of the mouth as well as assisting in vascular and lymphatic systems.

When looking at exercise we can now understand how proper breathing can help in recovery, pain management and better muscular function. In pregnancy and postnatal periods, where intra-abdominal pressure is compromise, have correct function through the diaphragm will aid in pain reduction and healing of the co-contraction of the TA pelvic floor. We can also see how if there is restriction in say the ribs this can then affect the function of other muscles such as the QL and in turn the respiratory diaphragms can be compromised.

As the diaphragms work in synergy alongside each other through electrical activity, nerves and fascia we can go back to thinking of them as like a Jellyfish; as one moves up so the others follow, as one moves down, so do the others. There is a constant flow and if this is disrupted or becomes dysfunctional we exhibit pain.

A good place to start thinking about this synergy is through Pilates where we often teach the co-contraction of the TA, pelvic floor and diaphragm, linking with the feet and the connection to the mouth.

Bordoni, B. and Zanier, E. 2013. ‘Anatomic connections of the diaphragm: influence of the respiration on the body system’, National Institutes of Health, pp.281-291. https://www.ncbi.nlm.nih.gov/pmc/articles/PMC3731110/.

1 thought on “The Jellyfish® explained: more than one diaphragm.”