The Origins of Massage Therapy

Its actually a really old practice!

The Story of Massage Therapy

In todays world, massage is a very common practice used to treat stress, aid relaxation, assist with injury, help with healing and as a treat to feel nice. It’s well known that touch helps humans to relax and destress. For most it feels good to be touched.

There are many, many forms that include: Thai, sports, remedial, head, deep, aromatherapy and Swedish. These are just a some of the types used today.

But where did it all stem from? Did we just realise that people like to be touched and it helps us to feel better? A little but massage actually has origins that are thousands of years old. Over time it has been modified, refined and perfected to what we know and use now.

There is some suggestion that the origins lay in China around 3000BC. ‘The Yellow Emperor’s Classic Book of Internal Medicine’ is one of the earliest known text containing details of massage therapy. Another book that may have been written around the same time is the ‘Cong Fou’. Within the book is illustrations and drawings of therapy. Translated the book reads: “Cong” meaning art, “Fou” meaning man, putting it together it could mean “the man who uses an art” or “the art used upon man”.

This is when it is thought the Antient Egyptians were using reflexology and essential oils. 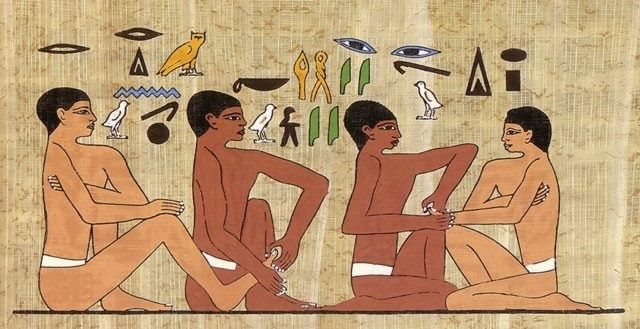 Papyrus rendering of the bas-relief carving found in the Tomb of the Physician, Ankhmahor in Saqqara, Egypt dating from 2300 B. C. E.

One could even suggest the god Nefertum was the first aromatherapist. It is also though the goddess Isis may have used massage to help cure numerous aliments.

There is an early reference to massage and reflexology in the tomb of Ptahhotep. Ptahhotep is shown having what looks like his hands and feet being rubbed by a servant. The pharaoh Niuserre is shown to also be enjoying foot massages. In the sun temple of the sixth dynasty, there also scene showing the preparation of the oils.

There is also a reference to massage in the Kahun Medical Papyrus, it reads:

“Examination of a woman aching in her legs and her calves after walking. You should say of it ‘it is discharges of the womb’. You should treat it with a massage of her legs and calves with mud until she is well.”

It would seem even Cleopatra was a fan. The Roman Emperor Octavian, complained about Mark Anthony’s devotion to her stating , “he even massage her feet at dinner parties”.

There is also thought that massage has roots in India around 2700BC, used by Indo-Aryan settlements as part of everyday culture linked to social, religious or other customs. In Ayurvedic medicine texts, massage has been mentioned to offer healing factors and of high benefits to health. The Sanskrit word Ayurveda translates to “life health” or “life science”.

Homer made references to possible massage in the “Odyssey”, noting “rubbing and anointing were used for their invigorating effects”, and mentioning using oily mediums for massage.

Greeks also used massage of which there is suggestion that this is closely related to our modern sports massage where their techniques included trying to decrease ‘knots’ within the body through therapeutic rubbing.

There is also mention of the athletes in the Olympic Games using massage prior to their events.

In one passage of the Herodotus, it states “that after pouring a greasy mixture upon the body, each part ought to be rubbed, passing the hands from above downwards. At the commencement the friction ought to be gentle and slow, then it should become rapid and accompanied with pressure, while towards the end the friction will again become gentle.”

Even Hippocrates used friction and rubbing as a form of healing from injuries. When he wrote the Hippocratic Oath, he said’ “For rubbing can bind a joint that is too loose and loosen a joint that is too rigid”, “ rubbing can bind and loosen ; can make flesh and cause parts to waste. Hard rubbing binds ; soft rubbing loosens ; much rubbing causes parts to waste ; moderate rubbing makes them grow.” This is probably the earliest definite text about massage. Hippocrates, noted that it was better to rub upwards instead of downwards- the direction of blood flow.

It would seem that Julius Caesar was a fan of massage also, using it to help relieve his neuralgia and epileptic seizures. Caesar allowed himself to be pinched daily as part of his treatment.

Swedish doctor, gymnast and educator Per Henril Ling developed a method of movement known as the “Swedish Movement System.” This is regarded as the foundation for Swedish massage most commonly used in the West today.

Massage from Japan seems to have its origins in China and traditional Chinese medicine. The system Anma was founded around 1320 by Akashi Kan Ichi. Anma sees the use seven traditional techniques including pressing/stroking, grasping/kneading, strengthening, compressing, vibrating, tapping and “hand music”. Shinsai Ota developed abdominal palpitation, with use of deep movements to increase blood flow,

Shiatsu evolved from anma using intuitive techniques and a spiritual approach to healing which identifies ways how to take responsibility for a healthy and happy life in the practitioner’s own hands. It is practiced mainly in Switzerland, France and Italy.

Where the Industry Is Going

As our understanding of the how the systems of the body work, our understanding and application of massage has also refined. In modern massage you might also see trigger points, stretching therapy, stones, oils and candles. There is still more to discover and as we do, our practice evolves.

Massage is widely used for helping with many different ailments and along side many other therapies. What seems to be true is that is works, both preventative and treatment wise. You will massage for birth, healing, injuries and so much more.